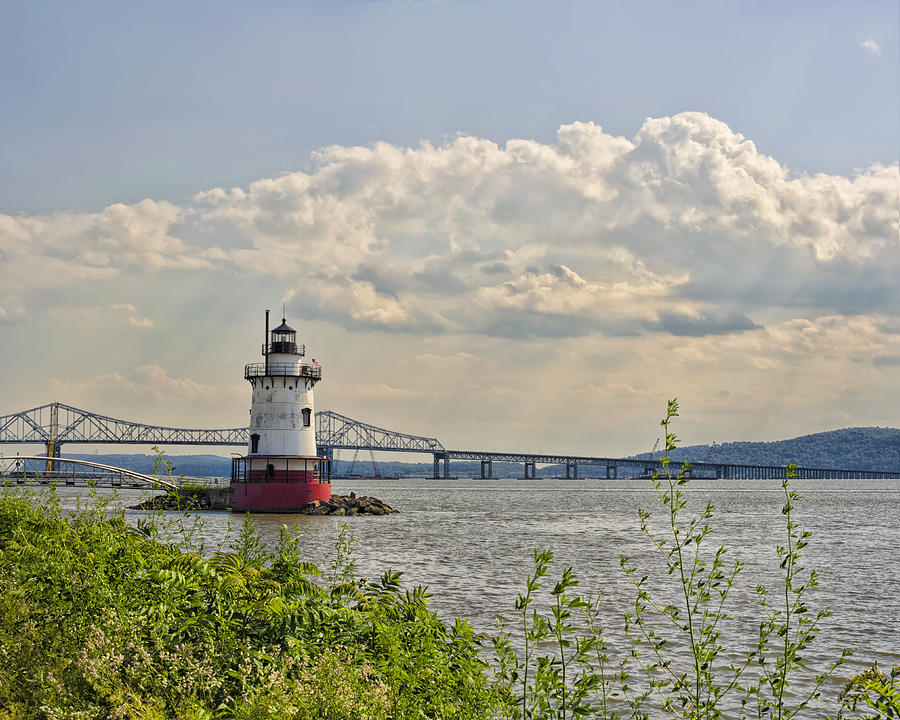 a/ka THE BRIDGE AND ITS SENTINEL

This is now a historic image, as the first collector noted it soon would be when she and her husband purchased it at my exhibit in August 2016. It depicts the Tarrytown Lighthouse (also called the Kingsland Point Lighthouse and the Sleepy Hollow Lighthouse) and the Tappan Zee Bridge seen from the east shore of the Hudson River in Sleepy Hollow, New York. The cast iron spark plug lighthouse was built in 1883; the Tappan Zee Bridge, fully demolished in 2018, was built from 1952-1955, so it lasted little more than half a century. Cranes constructing the new Mario M. Cuomo Bridge that replaced the Tappan Zee can be seen alongside the bridge. Today, things look very different and there are now two modern bridge spans running side by side across the Hudson River. As the original Tappan Zee Bridge was dismantled, much of its old construction materials were recycled.

One of my most popular images, appearing in three gallery exhibitions. It was last on exhibit in "Points of View from the Circle" at the Upstream Gallery in Hastings-on-Hudson, in August 2016 where it was sold to collectors who long ago became friends. It was such a lovely day when I delivered it to their house and we hung it in their living room. I had the image printed on aluminum by FAA /Pixels for exhibition and I can attest to how beautifully the dye sublimated aluminum print rendered the light coming through the clouds and the subtle variations in color. Metal is one of my favorite surfaces for images of water.

The image was first exhibited in the juried exhibition "Bridging the Waters" at the Rockland Outreach Center, in Nyack, New York from September - November 2014 featuring artwork in all media celebrating the Tappan Zee Bridge, organized around the upcoming construction of the new Maria M. Cuomo bridge, named after New York's former governor (and father of recent Governor Andrew Cuomo).

Artists living on the east side of the Hudson River, like me, showed their images in Nyack; artists residing on the Rockland side had work hung in Tarrytown, New York, with the openings scheduled weeks apart, to encourage us to attend and mingle at both events, uniting artists and art lovers from both sides of the river.

At their request, the work was later on extended loan to the New York State Thruway Authority for a year until November 2015, when it was chosen for another historic exhibition.

In the winter of 2015 it was featured on the front wall as you entered the juried exhibit "Through the Decades, Picturing 50 Years in Westchester" at the ArtsWestchester gallery in White Plains, New York.

The image has also been popular here on Fine Art America and Pixels, where it has sold and garnered over 5,000 views. It has been featured in the following groups:

What a marvelous maritime image!

Thanks so much Alex. It's great to reach that goal!