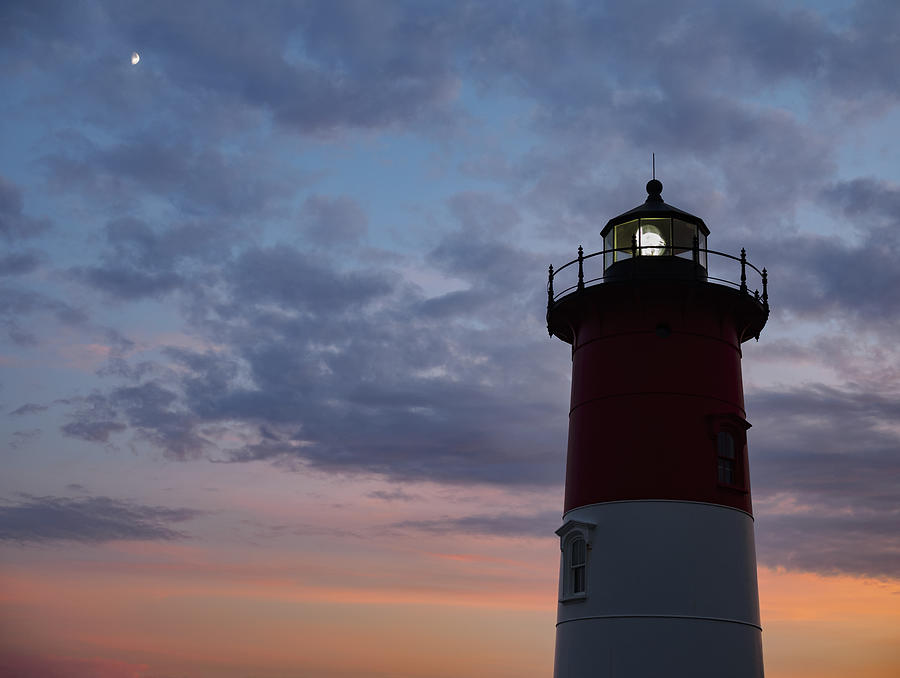 Nauset Light lighthouse at sunset with the moon and pink orange purple and blue sky, Eastham, Cape Cod, Massachusetts. This lighthouse, which originally stood in Chatham, Massachusetts, is the inspiration for the logo on the Cape Cod Potato Chips bag. It was built in 1877 and was one of twin lighthouses in Chatham until 1923 when it was dismantled and moved to Eastham to replace the Three Sisters lighthouses. It received its distinct red and white paint in the 1940s. Coastal erosion threatened the lighthouse and in 1996 it was moved 300 feet all in one piece. It is on the National Register of Historic Places.

This minimalistic composition of this landmark lighthouse will be at home whether your decorating tastes run to traditional or modern.

This image was exhibited at Morgan Stanley's NY headquarters in a show entitled Art@MS in 2017 where the original printed on beautiful aluminum sold.

Soft lovely and intriguing one star shining to Wishon

Nice backdrop of color to this image, Marianne!

Congratulations!! This beautiful image has been selected to be featured for the week in the “New England Photographers Photographing New England” Group Home Page. You are welcome to add a preview of this featured image to the group’s discussion post titled “2019 November & December: Stunning Featured Images and Thank-you’s” for a permanent display within the group, to share this achievement with others. You may also share this featured image on our Facebook page: https://www.facebook.com/groups/171657183565863/ Thank you for your participation in the group! (December 19, 2019)

One of your peers nominated this image in the 1000 views Groups nominated images by your fellow artist in the Special Features #12 promotion discussion. Please visit and pass on the love to another artist.

nicely done! nominated for a feature in the 1000 views group!

Beautiful contrast in the sky!